For the umpteenth time, a renowned global internet watchdog has exposed India for projecting anti-Pakistan propaganda on the international stage.

This time, Stanford Internet Observatory (SIO), a Stanford University organization studying the abuse of the internet, has busted a nefarious Indian online network that was working to defame Pakistan.

In one of its recent reports, SIO claims that on 24 August 2022, Twitter shared 15 datasets of information operations it identified and removed from its platform with researchers at the Twitter Moderation Research Consortium for an independent analysis.

One of the datasets contained 1,198 accounts that tweeted about India and Pakistan. The network was suspended for violating Twitter’s Platform Manipulation and Spam Policy. Twitter claimed that the country of origin of this specific dataset was India.

The network tweeted mostly in English, but also in Hindi and Urdu. The accounts claimed to be of ‘proud Kashmiris’ who claimed to be the relatives of Indian soldiers.

SIO states that the network appreciated Indian military operations in Indian Illegally Occupied Jammu and Kashmir (IIOJK) and maligned the militaries of Pakistan and China. It also consistently targeted those who opposed the Indian government.

SIO claims that the network was the most active in 2021. However, by March 2021, Twitter had suspended most of the accounts within the network.

The network frequently tweeted using hashtags that were related to IIOJK and Indian and Pakistani armies. The most commonly used hashtag was ‘Kashmir’ which generated nearly 40,000 tweets. Other hashtags were ‘Pakistan’, ‘India’, ‘Indian Army’, and ‘Pakistan Army.’

SIO notes that most accounts claimed to be Kashmiris, and frequently stated that they are living in IIOJK. They used stock images taken from the internet as their profile pictures.

The most commonly found bios of these accounts were ‘Proud Indian’, ‘Proud Kashmiri’, ‘My Heart belongs to Kashmir’, and ‘Soul to India and Life to Humanity.’ Most of these accounts also claimed to be relatives of Indian army officers, freelance reporters, volunteers, YouTubers, students, and digital marketing influencers.

These accounts regularly tagged regional journalists, Indian politicians, and statesmen from Balochistan to project an anti-Pakistan narrative to the world.

One of the accounts in the network once tweeted,

#ISPR has raised an #astonishing network of 4000-strong highly qualified #Information Warfare specialists during the past decade through a carefully crafted internship program that is directly run by #ISI.

SIO highlights that the network heaped regular praises on the Indian army for its military operations in IIOJK, and for the provision of humanitarian services in IIOJK. 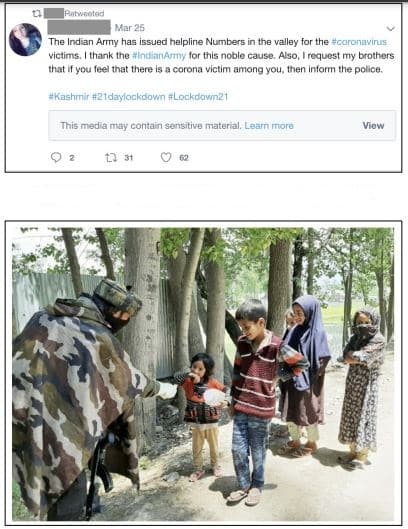 The network used to project rallies in Balochistan as anti-Pakistan protests. They accused the Pakistani army of committing human rights abuses. Tweets claimed that Pakistan is not safe for Hindus, and Pakistan abandoned its citizens in China when the COVID-19 pandemic began. The network also criticized women’s rights in Pakistan.

Besides defaming the Pakistani army, the network regularly projected the Indian army’s dominance over the Chinese military. It claimed that Indian soldiers are courageous while Chinese soldiers are cowards. Indian soldiers who were killed in clashes with the Chinese army were hailed as heroes by the network. It also blamed unethical Chinese military tactics for failed Indian army’s expeditions.

The network also urged Indian citizens to buy only made-in-India products and delete Chinese apps like TikTok and WeChat. It blamed China for COVID-19 and referred to the virus as the Chinese virus on a regular basis.

It also criticized China for hiding the Coronavirus pandemic from the rest of the world. On the flip side, it praised the Indian government’s efforts against Coronavirus.

SIO concludes that the network actively highlighted the activities of the Indian army in IIOJK, and condemned Pakistani and Chinese militaries. Two accounts ‘@KashmirTraitors’ and ‘@KashmirTraitor1’ were the most active. 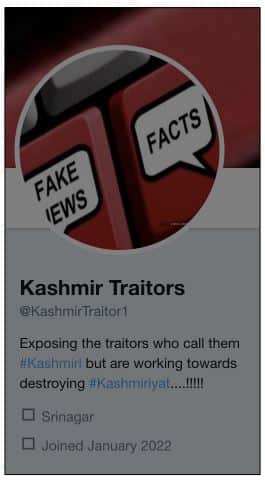 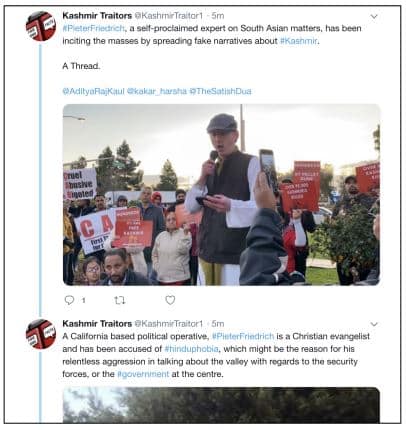 The busted Indian network is large and appears to be politically motivated. The report only scratches the surface, SIO asserts, calling on researchers of the Twitter Moderation Research Consortium to further probe this network.