Special Assistant on Information and Broadcasting Dr. Firdous Ashiq Awan said that Pakistan will continue to raise voice for the legitimate and principled stance of Kashmiri people for the right to self-determination.

Addressing Kashmir Solidarity Youth Convention in Islamabad on Friday, she said the world must listen to the sobs and cries of Kashmiri children who are facing the worst form of Indian state terrorism and brutalities.

The Special Assistant said Prime Minister Imran Khan has become the ambassador and advocate of Kashmir to heal the wounds of Kashmiri children. She said that the prime minister is contacting important capitals to apprise them of the ground situation in occupied Kashmir.

She said the human rights champions should also come forward and extend their support to the oppressed Kashmiri people. She regretted that occupied Kashmir has been turned into the world’s biggest prison where people have been detained to their homes whilst the human rights organizations, the media and the UN bodies have no access to the valley. 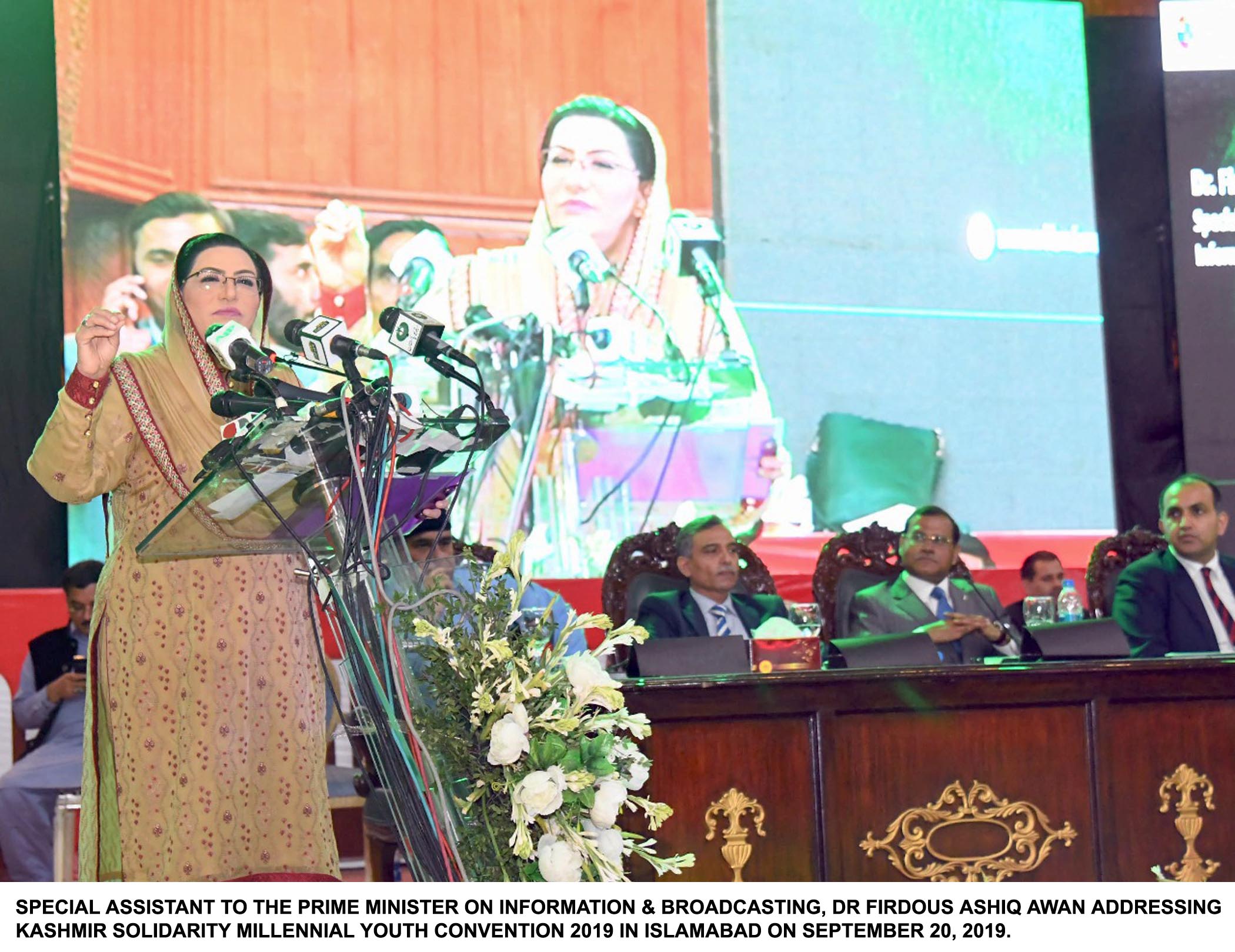 Prime Minister’s Special Assistant on Information and Broadcasting Dr Firdous Ashiq Awan has said women of Pakistan are standing with their Kashmiri mothers, daughters, and sisters in raising their voice against Indian oppression continuing in Occupied Kashmir.

She was addressing a rally organized by women employees of the Ministry of Information and Broadcasting in Islamabad this afternoon to express solidarity with the people of Occupied Kashmir.

Dr Firdous Ashiq Awan said the people of Occupied Kashmir are writing a new chapter through their determination, struggle and blood to get rid of Indian oppression. She said the day is not far off when Kashmiris’ struggle will bear fruit and they will soon come out of the Indian slavery.

The Special Assistant said Kashmiri people are not being allowed to offer Friday prayer and other religious activities for the last one hand half month.

She said Prime Minister Imran Khan is vociferously raising the issue of Kashmir at world fora and he will certainly highlight this matter in his address at the UN General Assembly and during his interactions with the world leaders, rights organizations, and the international media.

The Special Assistant joined her voice with the participants and raised slogans in favor of Kashmiris. After Afghans, Pakistanis have the greatest stake in Afghanistan’s peace: PM Imran