The two projectiles were launched from Kaechon, north of Pyongyang, the North Korean capital, toward the sea off the North’s east coast, flying up to 205 miles, the South Korean military said in a statement.

It was the eighth time North Korea has tested ballistic missiles or other projectiles since late July, and the first weapons test in 17 days.

South Korean defense officials provided no further details on the latest test by the North. They said they were analyzing data they acquired through radar and other intelligence-gathering equipment to determine what type of projectiles were launched.

North Korea began its latest series of missile tests in late July as denuclearization talks between the United States and North Korea stalled. The launching on Tuesday came hours after the country said it was willing to sit down with the United States in late September “for comprehensive discussions.”

But it said Washington must come to the negotiating table with acceptable new proposals; otherwise, dealings between the two countries may come to an end, First Vice Foreign Minister Choe Son-hui said in a statement carried by the North’s official Korean Central News Agency late on Monday.

“We’ll see what happens,” he said. “In the meantime, we have our hostages back, we’re getting the remains of our great heroes back and we’ve had no nuclear testing for a long time.”

Mr. Trump added: “I always say having meetings is a good thing, not a bad thing.”

The American president and Mr. Kim met in Singapore in June last year in the first summit ever between the United States and North Korea. But their meeting produced only a vaguely worded joint statement in which Mr. Kim committed to “work toward complete denuclearization of the Korean Peninsula” in return for security guarantees and “new” relations from Washington. 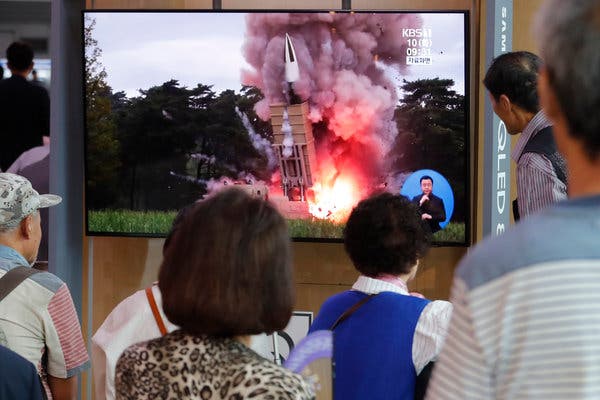 Subsequent talks on how to carry out the deal quickly stumbled over how quickly North Korea should dismantle its nuclear program and when the United States should start lifting sanctions.

Mr. Kim and Mr. Trump met again in Hanoi, Vietnam, in February, but parted without an agreement or joint statement. They met again briefly on the inter-Korean border on June 30, trying to keep the momentum for dialogue alive.

In Hanoi, Mr. Kim insisted on moving in phases toward denuclearization. He offered to dismantle the uranium-enrichment facilities at Yongbyon, north of Pyongyang, the North Korean capital, and demanded in return that the United States lift the most biting of the United Nations sanctions imposed since 2016, including a ban on key North Korean exports like coal and iron ore, fisheries and textiles.

Mr. Trump rejected the offer, demanding the much quicker and broader elimination of North Korea’s weapons of mass destruction, including its nuclear warheads and long-range missiles. North Korea is widely believed to run at least one other uranium-enrichment plant outside Yongbyon, and to keep its nuclear arsenal in secret locations around the mountainous country.

Mr. Kim returned home from Hanoi without badly needed relief from sanctions. In April, Mr. Kim set the end of the year as a deadline for the United States to offer improved terms for denuclearizing the Korean Peninsula.

While negotiations stalled, North Korea is believed to have continued to produce fissile materials.

Its latest series of weapons tests was seen as an attempt to raise tensions and increase its leverage against Washington, while at the same time testing new, short-range ballistic missiles and large-caliber multiple-tube rocket launchers that threatened South Korea and Japan, American allies.

But the North’s missiles and rockets launched in recent weeks have all been short-range ones, and Mr. Trump shrugged off the tests, calling them “smaller ones” that involved neither nuclear explosions nor intercontinental ballistic missiles.

Last month, he said Mr. Kim had sent him a letter with a “small apology,” explaining that North Korea was conducting tests to counter an American military exercise with South Korea last month that Mr. Trump himself criticized as too expensive.

Analysts said that by playing down North Korea’s recent missile tests, Mr. Trump gave the country a green light to develop and test new short-range weapon systems that threatened not only South Korea and Japan but also American troops and civilians living there.