-By Nasir Mahmood
K-Electric (KE) board of directors has elected Ikram Sehgal as new Chairman of the Board with immediate effect. Ikram Sehgal succeeds Tayyab Tareen who resigned from the role on 18 January. With more than 40 years of business experience, Ikram Sehgal is Chairman, Pathfinder Group Pakistan. According to a claim made by K-Electric while serving in the Pakistan Army, Ikram Sehgal was the first Pakistani PoW in history to escape from an Indian camp. He holds a commercial pilot license and later started his own business in 1977. 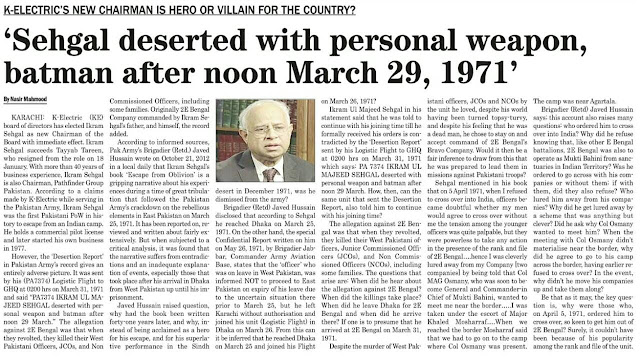 However, the ‘Desertion Report’ in Pakistan Army’s record gives an entirely adverse picture. It was sent by his (PA7374) Logistic Flight to GHQ at 0200 hrs on March 31, 1971 and said “PA7374 IKRAM UL MAJEED SEHGAL deserted with personal weapon and batman after noon 29 March.” The allegation against 2E Bengal was that when they revolted, they killed their West Pakistani Officers, JCO’s, and Non Commissioned Officers, including some families. Originally 2E Bengal Company commanded by Ikram Sehgal’s father, and himself, the record added.
According to informed sources Pak Army’s Brigadier (Retd.), Javed Hussain wrote on October 21, 2012 in a local daily that Ikram Sehgal’s book ‘Escape from Oblivion’ is a gripping narrative about his experiences during a time of great tribulation that followed the Pakistan Army’s crackdown on the rebellious elements in East Pakistan on March 25, 1971. It has been reported on, reviewed and written about fairly extensively. But when subjected to a critical analysis, it was found that the narrative suffers from contradictions and an inadequate explanation of events, especially those that took place after his arrival in Dhaka from West Pakistan up until his imprisonment.

Javed Hussain raised question, why had the book been written forty-one years later, and why, instead of being acclaimed as a hero for his escape, and for his superlative performance in the Sindh desert in December 1971, was he dismissed from the army?

Ikram Ul Majeed Sehgal in his statement said that he was told to continue with his joining time till he formally received his orders is contradicted by the ‘Desertion Report’ sent by his Logistic Flight to GHQ at 0200 hrs on March 31, 1971 which says: PA 7374 IKRAM UL MAJEED SEHGAL deserted with personal weapon and batman after noon 29 March. How, then, can the same unit that sent the Desertion Report, also told him to continue with his joining time?

The allegation against 2E Bengal was that when they revolted, they killed their West Pakistani officers, Junior Commissioned Officers (JCOs), and Non Commissioned Officers (NCOs), including some families. The questions that arise are: When did he hear about the allegation against 2E Bengal? When did the killings take place? When did he leave Dhaka for 2E Bengal and when did he arrive there? If one is to presume that he arrived at 2E Bengal on March 31, 1971.
Despite the murder of West Pakistani officers, JCOs and NCOs by the unit he loved, despite his world having been turned topsy-turvy, and despite his feeling that he was a dead man, he chose to stay on and accept command of 2E Bengal’s Bravo Company. Would it then be a fair inference to draw from this that he was prepared to lead them in missions against Pakistani troops?
Sehgal mentioned in his book that on 5 April 1971, when I refused to cross over into India, officers became doubtful whether my men would agree to cross over without me the tension among the younger officers was quite palpable, but they were powerless to take any action in the presence of the rank and file of 2E Bengal….hence I was cleverly lured away from my Company [two companies] by being told that Col MAG Osmany, who was soon to become General and Commander-in Chief of Mukti Bahini, wanted to meet me near the border…..I was taken under the escort of Major Khaled Mosharraf….When we reached the border Mosharraf said that we had to go on to the camp where Col Osmany was present. The camp was near Agartala.
Brigadier (Retd.) Javed Hussain says; this account also raises many questions: who ordered him to cross over into India? Why did he refuse knowing that, like other E Bengal battalions, 2E Bengal was also to operate as Mukti Bahini from sanctuaries in Indian Territory? Was he ordered to go across with his companies or without them; if with them, did they also refuse? Who lured him away from his companies? Why did he get lured away by a scheme that was anything but clever? Did he ask why Col Osmany wanted to meet him? When the meeting with Col Osmany didn’t materialise near the border, why did he agree to go to his camp across the border, having earlier refused to cross over? In the event, why didn’t he move his companies up and take them along?
Be that as it may, the key question is, why were those who, on April 5, 1971, ordered him to cross over, so keen to get him out of 2E Bengal? Surely, it couldn’t have been because of his popularity among the rank and file of the unit.

2 thoughts on “K-Electric’s new Chairman is hero or villain for the country?”