MELILLA (Reuters) – Four migrants have died and up to 16 more are missing after trying to cross into Europe from North Africa on a small raft, Spain’s coastguard said on Wednesday. 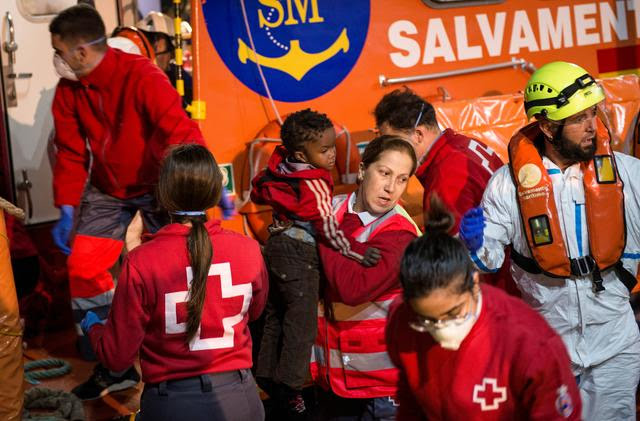 Members of the Spanish Red Cross help migrants disembark the ship after dozens of them were rescued in a raft off the coast at the Mediterranean Sea, at the port of the Spanish North African enclave of Melilla, November 27, 2019.
REUTERS/JESUS BLASCO DE AVELLANEDA

Rescuers saved 58 people from the raft, which was found drifting around 37 miles off the coast of Morocco on Tuesday night. Three bodies were recovered from the water and another migrant died after being taken to shore, a spokeswoman for the coastguard said.

Sea-borne migration to Europe has dropped sharply since peaking in 2015 but thousands still attempt the dangerous Mediterranean crossing every year, looking to escape poverty and conflict in their home countries.

The latest group was brought to Spain’s North African enclave of Melilla, where a Reuters photographer saw survivors being helped ashore and given medical assistance by the Red Cross. Wrapped in thermal blankets, some of the migrants appeared to be in a state of shock after their ordeal.

European and Spanish authorities have deployed boats and a plane in the search for a further 16 people who are believed to have been on the raft.

They are also searching for a separate craft carrying 78 migrants that is believed to have set off from Morocco on Tuesday night.

Before Wednesday’s deaths, at least 1,136 migrants had already died or gone missing at sea this year after trying to make the crossing, according to the International Organization for Migration.

Italian authorities saved 149 people from a capsized dinghy off the island of Lampedusa on Sunday. The bodies of five women were retrieved and several others remain unaccounted for.

Meanwhile Spanish charity ships Open Arms and Aita Mari rescued more than 140 migrants from rafts off the Libyan coast last week and transported them to Italy.