WASHINGTON (AP) — The Latest on President Donald Trump and the House impeachment probe (all times local):

Finnish President Sauli Niinisto is urging President Donald Trump to work with European leaders and adds: “Mr. President, you have here a great democracy. Keep it going on.”

The two leaders spoke after a series of meetings Wednesday at the White House.

Niinisto’s comments about democracy come as Trump battles with House Democrats over an impeachment inquiry that have stoked concerns about a constitutional crisis.

His comments about working with Europe also came after Trump complained about persistent trade deficits with the European Union and stressed that “we’re going to have to start doing something.”

Trump is commenting about a House impeachment inquiry Wednesday as he meets with the president of Finland.

Trump was highly critical though of the whistleblower report alleging he used the power of his office to solicit interference from a foreign country in the 2020 U.S. election. 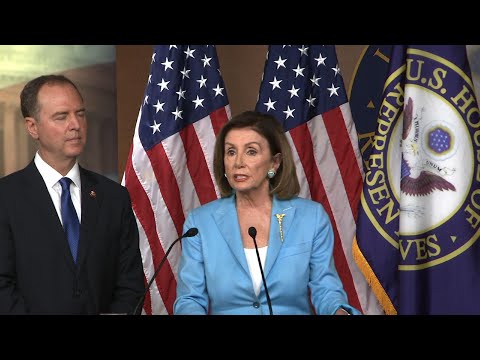 House Democratic leaders accused President Donald Trump of “incitement to violence” Wednesday and warned him not to intimidate the whistleblower or potential witnesses in their impeachment inquiry. (Oct. 2)

Trump says the whistleblower wrote about a “vicious conversation” that he asserted was in reality a “very innocent conversation.”

The whistleblower’s report was based on information from “multiple” U.S. government officials.

Trump says he’s trying to unmask the whistleblower whose complaint about his efforts to pressure Ukraine sparked the impeachment inquiry. The president has falsely raised the prospect that officials involved are guilty of treason.

Schiff, speaking at a news conference, said any effort by Trump’s administration to block the investigation would be considered more evidence of obstruction and perhaps generate more articles of impeachment.

House Oversight and Reform Committee Chairman Elijah Cummings says in a letter to White House acting chief of staff Mick Mulvaney that he wants all documents “memorializing communications between President Trump and the leader of any other foreign country” that relate to Trump’s efforts to pressure the Ukrainian president.

The letter says that includes any threats to condition U.S. aid on Ukrainian cooperation or to investigate Biden.

It also includes any efforts by Trump private attorney Rudy Giuliani or others to “induce, compel, petition, press, solicit, request, or suggest” help from Ukraine.

Trump has denied any wrongdoing.

House Democrats have set up closed-door depositions from two former U.S. officials who represented the Trump administration in Ukraine.

The plan to draw their testimony Thursday comes in spite of Secretary of State Mike Pompeo’s effort to delay former and current officials from providing documents and testimony in the impeachment inquiry against President Donald Trump.

House Democrats warn that blocking congressional access to impeachment witnesses could itself be an impeachable offense.

Pompeo said Tuesday the Democrats are trying to “intimidate” and “bully” career officials into appearing and claims it would be “not feasible” as demanded. House investigators counter that it would be illegal for the secretary to try to protect Trump by preventing the officials from talking to Congress.

Trump took to Twitter to brand the impeachment inquiry a “coup.”