ISLAMABAD: Pakistan has received $7.5 billion in foreign loans in first 11 months of the outgoing fiscal year amid a sharp rise in non-project borrowing that rose to 80% of total receipts, heightening risks of a debt trap.

The $7.5 billion in gross loans from July through May of fiscal year 2019-20 were equal to 58% of the annual budget estimate of $13 billion, reported the Ministry of Economic Affairs.

Pakistan does not have any option but to borrow to repay maturing loans and to show higher gross official foreign currency reserves that have once again dipped below $10 billion after the outflow of hot foreign money of over $3 billion.

However, after nearly $2 billion in fresh borrowing in June due to efforts of the economic affairs ministry, it is expected that the official reserves held by the central bank will remain in double digits.

The Ministry of Economic Affairs has secured these loans at very low rates, ranging from 2% to London Interbank Offered Rate (Libor) plus up to 0.6%. The duration of these loans ranges from 15 years to 25 years, unlike commercial loans that Pakistan has been receiving for six months to one and a half year. 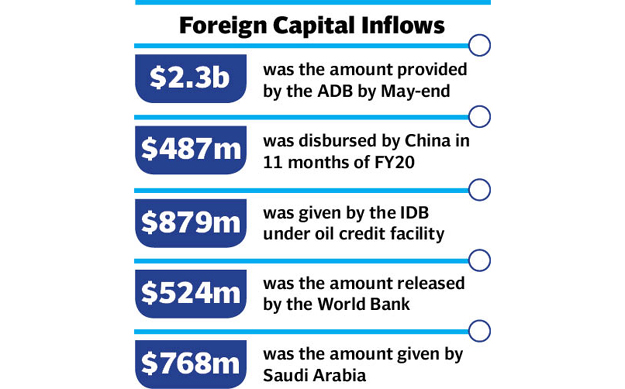 Total borrowing in the current fiscal year is expected to remain around $10 billion. The gap between the budgetary target of $13 billion and likely receipt of $10 billion is because of the finance ministry’s decision not to float Eurobonds for the sake of hot foreign money.

Most of the loans that Pakistan received in first 11 months of FY20 were utilised for repaying old loans. In the first 10 months (July-April), Pakistan returned $5.2 billion in principal loans, according to the economic affairs ministry. The annual repayment is estimated at $10.4 billion in the current fiscal year.

Pakistan has planned to seek $15 billion in gross foreign loans in next fiscal year 2020-21 aimed at servicing its maturing external public debt and building foreign currency reserves in the absence of non-debt creating inflows.

Out of the estimated external borrowing of $15 billion in fiscal year 2020-21, nearly $10 billion, or two-thirds, will be used to return the maturing loans, excluding interest payments.

The borrowing of $15 billion will be the highest for Pakistan in a single year, highlighting the challenges that every government faces due to the deepening debt trap.

The Pakistan Tehreek-e-Insaf (PTI) government, like its predecessor, has also remained unable to fully capitalise on non-debt creating inflows like exports, remittances and foreign direct investment.

Out of the $7.5 billion in gross loans, about $6 billion – 80% of total loans – was received as non-project loans. This means this money has not been utilised for any productive purpose, rather it has been consumed to finance the budget deficit and procurement of oil.

From July through May, Pakistan received $2.3 billion in budgetary support, another $2 billion in commercial loans and $1.5 billion for the purchase of crude oil.

Project loans, which stood at only $1.3 billion in 11 months, are often used for asset creation, which also provides a source to service these loans.

This trend suggests that Pakistan’s external debt woes will not ease in the near future and the country will keep taking new loans to repay the old ones.

Bilateral and multilateral creditors disbursed $4.8 billion in loans in July-May of fiscal year 2019-20, according to figures released by the Ministry of Economic Affairs.

In the 11-month period, $2 billion in commercial loans were obtained but repayments under the head stood at $3 billion.

China disbursed $487 million in project financing in 11 months of the current fiscal year. The ADB turned out to be a saviour for the government that provided $2.3 billion by the end of May, exceeding the annual target of $1.7 billion.

However, out of the $2.3 billion, the ADB’s budgetary support loans amounted to $1.8 billion including a billion dollars in crisis response facility.

The Islamic Development Bank (IDB) disbursed $879 million under the oil credit facility out of the total of $1.1 billion.