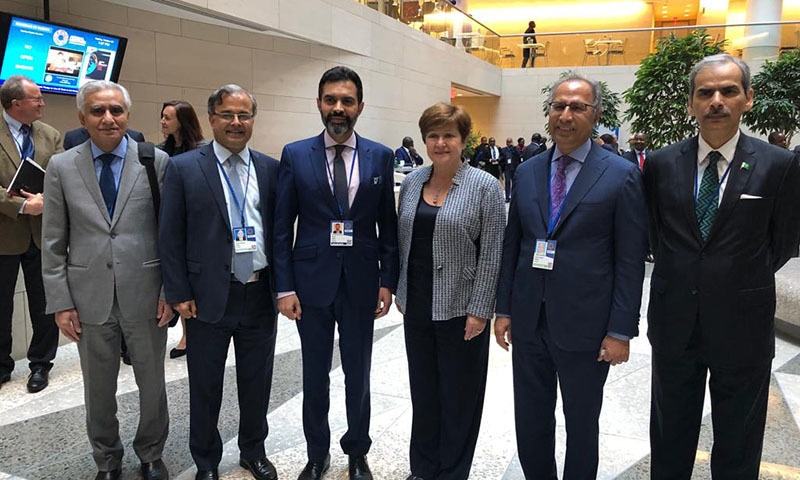 The Pakistani delegation meets with International Monetary Fund (IMF) Managing Director Kristalina Georgieva. — Photo provided by author
The International Monetary Fund (IMF) and the World Bank provided assurances of their continued support to Pakistan’s economy in meetings with Adviser to the Prime Minister on Finance Dr Abdul Hafeez Sheikh, a press statement issued by the government on Monday said.

According to the press release, issued by the Finance Division, Sheikh, along with a delegation — including State Bank Governor Reza Baqir, Finance Secretary Naveed Kamran Baloch and Economic Affairs Division Secretary Noor Ahmed — had back-to-back meetings with the managing directors of the IMF and World Bank to apprise them of institutional reforms as well as steps undertaken during the last year to put the country’s economy on the path to progress and stability.

The meetings took place in Washington DC, where the Pakistani delegation has gone to attend the annual round of meetings of the World Bank-IMF group.

In the meeting with World Bank Managing Director (Operations) Axel Van Trotsenburg and other senior officials, the premier’s advisor congratulated Trotsenburg on his appointment and appreciated the support the Bank had provided to Pakistan.

As per the press release, Sheikh highlighted the government’s focus on expediting the speedy roll-out of World Bank pipeline projects as well as the steps taken in this regard.

The World Bank managing director noted that Pakistan was among the Bank’s largest partners and beneficiaries of the International Development Association (IDA), adding that Pakistan should make “optimal use” of the World Bank’s resources.

He also assured the Pakistani delegation of the Bank’s continued support to Pakistan’s development effort.

Meanwhile, in an “extensive session” with IMF Managing Director Kristalina Georgieva and other senior IMF officials, Sheikh, along with the Pakistani delegation, provided an overview of the implementation of the IMF programme in Pakistan.

He also congratulated Georgieva on her recent appointment as the IMF managing director.

During the meeting, the advisor to the premier said that the results of the first quarter (of the financial year) had indicated that Pakistan’s economy was on the path to stabilisation, adding that the reforms initiated under the IMF programme were “demonstrating positive outcomes”.

As per the press release, Georgieva recognised the “tough decisions” that were being made and implemented to stabilise Pakistan’s economy. While appreciating the commitment of the government, she assured IMF’s continued support to the reform process.