NEW DELHI — More than four million people in India, mostly Muslims, are at risk of being declared foreign migrants as the government pushes a hard-line Hindu nationalist agenda that has challenged the country’s pluralist traditions and aims to redefine what it means to be Indian.

The hunt for migrants is unfolding in Assam, a poor, hilly state near the borders with Myanmar and Bangladesh. Many of the people whose citizenship is now being questioned were born in India and have enjoyed all the rights of citizens, such as voting in elections.

State authorities are rapidly expanding foreigner tribunals and planning to build huge new detention camps. Hundreds of people have been arrested on suspicion of being a foreign migrant — including a Muslim veteran of the Indian Army. Local activists and lawyers say the pain of being left off a preliminary list of citizens and the prospect of being thrown into jail have driven dozens to suicide.

But the governing party of Prime Minister Narendra Modi is not backing down.

Instead, it is vowing to bring this campaign to force people to prove they are citizens to other parts of India, part of a far-reaching Hindu nationalist program fueled by Mr. Modi’s sweeping re-election victory in May and his stratospheric popularity.

Members of India’s Muslim minority are growing more fearful by the day. Assam’s anxiously watched documentation of citizenship — a drive that began years ago and is scheduled to wrap up on Aug. 31 — coincides with another setback for Muslims, this one transpiring more than a thousand miles away.

Less than two weeks ago, Mr. Modi unilaterally wiped out the statehood of India’s only Muslim-majority state, Jammu and Kashmir, removing its special autonomy and turning it into a federal territory without any consultation with local leaders — many of whom have since been arrested.

Among Mr. Modi’s critics, events in Assam and Kashmir are Exhibits A and B in their conviction that the prime minister is using the early months of his second term to push the most forceful and divisive Hindu nationalist agenda ever attempted in India and to fundamentally reconfigure the concept of Indian identity to be synonymous with being Hindu. Many Indians, on both sides of the political divide, see Assam and Kashmir as harbingers of the direction Mr. Modi will take this nation of 1.3 billion people in the coming years. 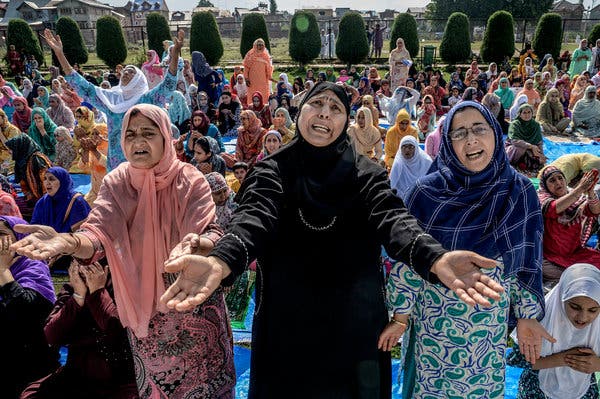 The stated purpose of the citizenship dragnet in Assam is to find undocumented immigrants from Bangladesh — a predominantly Muslim country to its south. Amit Shah, India’s powerful home minister, has repeatedly referred to those immigrants as “termites.’’

All of the 33 million residents of Assam have had to prove, with documentary evidence, that they or their ancestors were Indian citizens before early 1971, when Bangladesh was established after breaking away from Pakistan. That is not easy. Many families are racing to get their hands on a decades-old property deed or fraying birth certificate with an ancestor’s name on it.

Beyond this, Mr. Modi’s government has tried to pass a bill in Parliament that carves out exemptions for Hindus, Buddhists, Christians and people from other religions — but leaves out Muslims.

Mr. Modi’s critics say he is playing a dangerous game and pulling apart the diverse, delicate social fabric that has existed in India for centuries.

The prime minister’s political roots lie in a Hindu nationalist movement that emphasizes the religion’s supremacy. This worldview has a long history of sowing division between the country’s Hindu majority and Muslim minority, at times exploding in violence.

Assam has been hit by its own troubles and ethnic bloodshed. But the violence being reported now is self-inflicted.

Noor Begum, who lived in a small hamlet in a flood-soaked district, spiraled into depression after finding out that she and her mother had been excluded from the citizenship lists. Her father and seven siblings had made it.

“Of course she was Indian,” said her father, Abdul Kalam, a retired laborer. “She used to sing Indian national songs at school. She felt very Indian.”

On a bright morning in June, Noor hanged herself from a rafter. She was 14.

Many Muslims in Kashmir are despondent as well. After Mr. Modi’s government erased Kashmir’s autonomy, thousands of outraged Kashmiris took to the streets, only to be locked down by a heavy deployment of security forces and a smothering communications blackout.

Kashmir has long been a flash point. Both India and Pakistan control different parts of it and several times, the tensions have driven the two nuclear armed rivals to war or dangerously close to it.

Though the Indian government has eased some of the communication restrictions in the past few days, hundreds of Kashmiri intellectuals are still under arrest and Pakistan is seething.

The tension with Pakistan tends to lift Mr. Modi’s political fortunes. His forceful stand against India’s No. 1 enemy just adds to his image as an unswerving patriot and one of the most decisive and powerful prime ministers India has produced in decades.

Many in India’s Hindu majority don’t object to Mr. Modi’s Hindu nationalist policies or even seem to think too much about them. They praise what they see as the strides he has made in fighting poverty and projecting a more muscular image of India on the world stage.

A small but vocal minority of left-leaning intellectuals, Muslim leaders and opposition politicians has tried to turn public opinion against Mr. Modi’s policies without much success.

What is happening in Assam and Kashmir “is an assault on the very imagination of India, of the freedom struggle, of the Constitution, of the idea of a country in which everyone belongs equally,” said Harsh Mander, a former civil servant turned human rights activist.

“Muslims are the enemy,” he said. “It’s a war on the Indian Constitution.”

Ashutosh Varshney, the head of Brown University’s South Asia program, said that India “in all probability and unless checked is headed toward a Hindu nationalist, majoritarian state.

With the political opposition in total disarray and all government agencies — especially the bureaucracy and the security apparatus — firmly in Mr. Modi’s hands, Mr. Varshney said the only hope for India’s secular democracy is in the courts.

Even a streak of alarming headlines in recent weeks, including big job losses in the auto sector, deadly flooding across the country and a new outbreak of violence by Hindu mobs against Muslims, hasn’t dented Mr. Modi’s popularity.

Outsiders may wonder how any political movement in India could question Muslims’ contribution to society. India is a thoroughly multicultural place, and Muslims have contributed for centuries, even ruling the country at times. Muslim emperors built some of India’s brightest cultural treasures, including the Taj Mahal.

Mr. Modi and allies in his Bharatiya Janata Party, known as the B.J.P., have denied any anti-Muslim bias and rejected criticism that the way they have handled the mass citizenship check in Assam has been harsh or discriminatory. State level officials in Assam said this was purely an administrative exercise to ferret out people who have no legal right to stay in India.

Rupam Goswami, a spokesman for the state B.J.P. party, said the registry “is only a process of documentation.”

Like much of India, Assam has reflected a tapestry of different ethnic groups and religions for as long as anyone can remember. Its beautiful tea estates have attracted flocks of migrant workers.

But many indigenous Assamese, who are mostly Hindu, have resented immigrants from Bangladesh, saying that the ethnic Bengalis were coming into their state and taking away their jobs and their land. In 1983, this locals-versus-outsider enmity blew up.

Assamese villagers slaughtered more than 1,000 ethnic Bengalis, many of them Muslim — scholars say that most ethnic Bengalis in Assam are Muslim. In 2012, another smaller wave of violence erupted.

The next year, India’s Supreme Court set in motion a process for a large-scale registration of citizens to be updated in Assam. This would determine who was an Indian and who was not. The deadline for residents to provide documentary proof that they or their ancestors have a legacy as Indian citizens, going back to March 1971 or earlier, has been extended several times. 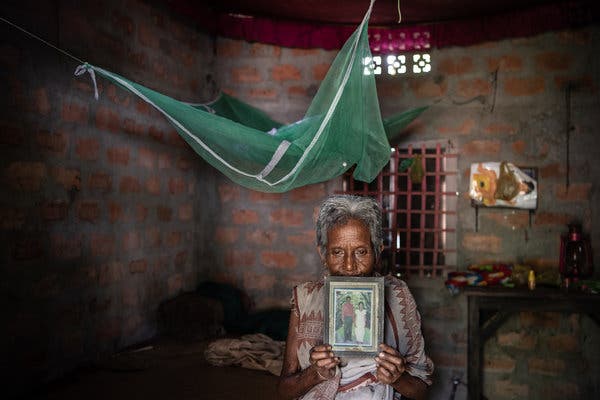 When a preliminary Assam citizenship list was published in 2018, leaving off four million people, scholars said the majority were Muslim but large numbers of Bengali-speaking Hindus were also excluded.

The B.J.P. then had to regroup. Its response was to push a new citizenship bill that said migrants from neighboring countries who were Hindus, Christians, Sikhs, Buddhists, Parsees or Jains would be eligible for Indian citizenship. One of South Asia’s biggest religious groups was conspicuously left off: Muslims.

The government said it was trying to help religious minorities from Afghanistan, Pakistan and Bangladesh. To critics, it looked like another anti-Muslim campaign, plain and simple.

The bill sailed through the lower house of Parliament but stalled after many Assamese politicians said they didn’t like the religious dimension the B.J.P. was injecting — or the possibility that the large number of Hindu Bengalis would be given an exception. Some B.J.P. politicians say they want to revive it.

Many of the people whose names were left off the list were born in India, lived here all their lives and were considered citizens in every right.

One of them was Mohammed Sanaullah, a retired army captain. In May, he was picked up on suspicion of being an illegal migrant and jailed for nearly two weeks.

The Assam state government sends suspected foreign migrants to foreigner tribunals, a growing network of more than 100 small courts where the onus is on the suspects to provide the proof that the government is demanding. Human rights observers have complained that the proceedings often discriminate against Muslims and are the equivalent of sham trials.

The B.J.P. doesn’t want to stop at Assam.

Mr. Shah and other party leaders have promised their supporters that they will bring mass citizenship reviews across the country. Human rights activists fear these could be used to discriminate against minorities and this will be made easier because, under Supreme Court rules, individuals are allowed to legally challenge another’s citizenship.

More than 3.5 million people who have so far been left off the Assam citizenship list have filed challenges to their exclusion, and state-level officials are reviewing these claims.

But Assam is not waiting. The state government, which is controlled by an arm of the B.J.P., is planning to build 10 new detention camps with the capacity to hold thousands of people.

Bangladesh has not been eager to accept the ethnic Bengalis in Assam as citizens either. That could leave many languishing in a legal no-man’s land without many rights.

Critics say what is happening in both Assam and Kashmir (the state has a population of about 14 million) is an attempt to change the demographics in favor of Hindus. Kashmiris fear the government’s real plan in wiping out their autonomy is to pave the way to resettle large numbers of Hindu Indians in Kashmir and end its status as the one Muslim-majority territory in India.

Under the changes, Kashmiris will lose the special land rights they used to hold that made it difficult for non-Kashmiris to buy land in their state. Mr. Modi has argued that the new arrangement will bring outside investment, better governance and a “new dawn.

But other Indian states have similar protections for local residents and Mr. Modi’s party is not trying to change those.

Critics say the difference is obvious: Those states are not Muslim.