ISLAMABAD: (AP) – Over 45 members of the parliament (MPs) from the United Kingdom and peers have co-signed a letter written by MP Warrington South Faisal Rashid calling on the UN Secretary General Antonio Guterres to intervene and prevent India’s unconstitutional attack on Kashmir’s autonomy.

“We are deeply alarmed by reports that the Indian government has revoked Article 370 of constitution, stripping Kashmir of its autonomous status,” the letter states.

The letter terms the unilateral Indian decision a direct attack on the political status of Kashmir and its right to self-governance.  It says revocation of Article 370 would have far-reaching and dangerous consequences for the region.

“We also note that PM Modi has long been an exponent of militaristic, hostile anti-Muslim views as the political figurehead of a far-right Hindu-nationalist movement. His administration has overseen an aggressive erosion of the legal and constitutional foundations on which the Indian republic stands.

“Revocation of Article 370 represents a significant escalation of this process in what is the only Indian-occupied Muslim majority state. As secretary-general, we call on you to urgently bring this matter to the attention of the Security Council as a serious threat to maintenance of international peace and security.

”We note with alarm that India and Pakistan, whose longstanding differences in this region nearly led to open warfare just months ago, possess nuclear capabilities. We urge the United Nations to do everything in its power to de-escalate this extremely troubling and tense situation,” it concludes. 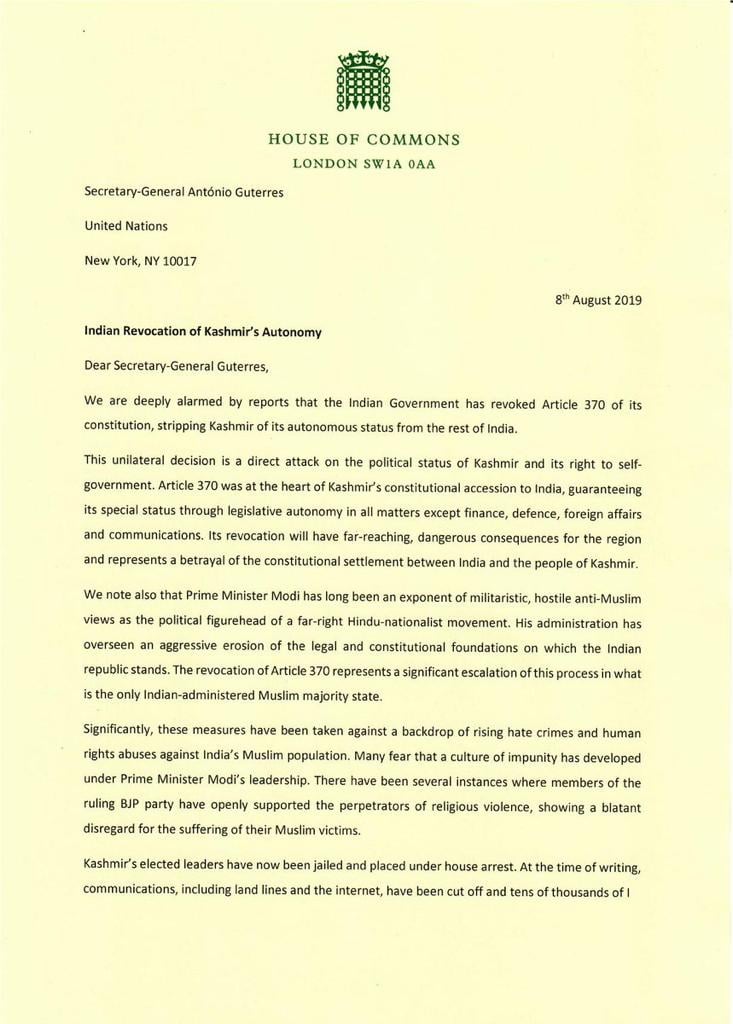 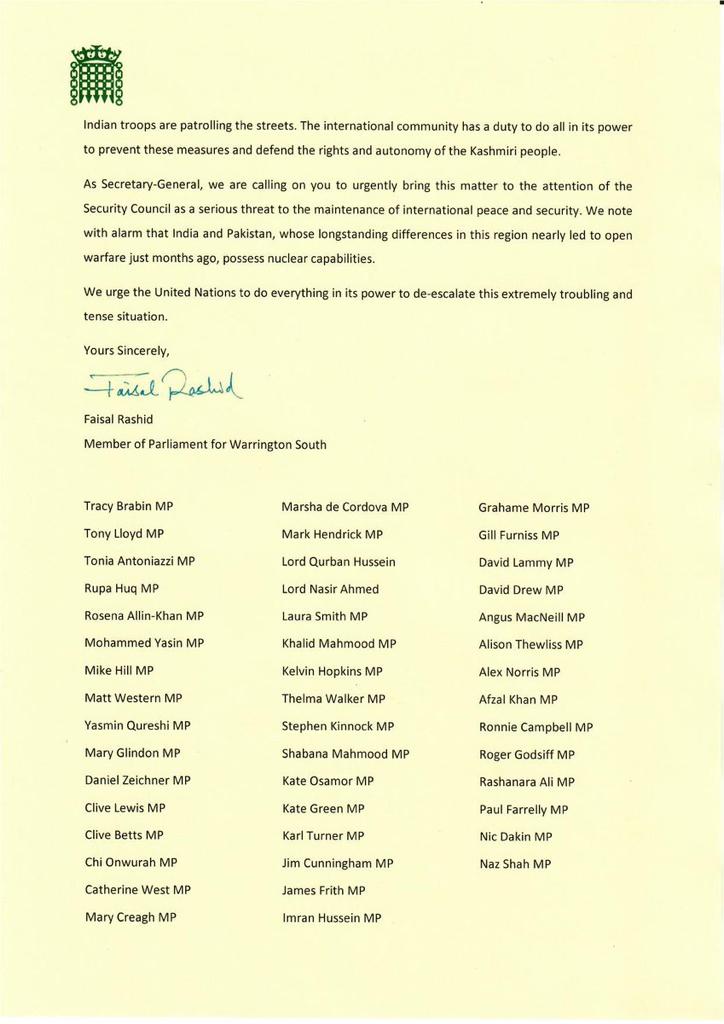 A separate letter written by members of the European Parliament to High Representative of the Union for Foreign Affairs and Security Policy Federica Mogherini expressed concerns on the recent developments in the Indian-occupied Jammu and Kashmir.

“Over the last few days, it appears the Indian authorities have increased the number of troops in Kashmir. They have also cancelled the annual Hindu pilgrimage to the region, which had been scheduled for this week,” the MPS say in the letter.

“We recall that the use of cluster ammunition would amount to a clear violation of the Geneva Conventions and of the international humanitarian law. We are concerned that repeal of Article 370 will inflame the already worsening situation in the region that is home to over seven million people.”

Expressing their concerns, the MPs say the recent developments increased the risk for human rights violations in the region. They say that for seven decades, the people of Kashmir have endured hardship and silence of the rest of the world.

“We urge you to immediately condemn any use of violence and call for restraint. We furthermore urge you to seek ways for the European Union to engage with all regional actors to mediate a solution to this long standing crisis,” it added.

Protesters chanted slogans against India and appealed to the EU to intervene and pressurise New Delhi to stop human rights violations in the valley. A protest demonstration was also held in favour of Kashmiris in New Zealand.  People gathered in front of the Indian High Commission in Wellington, asking the Modi government to stop genocide in Kashmir.