Israeli police fired stun grenades and rubber bullets at Palestinians who turned up in large numbers on Friday at the Al-Aqsa mosque compound in Jerusalem, leaving at least three demonstrators wounded.

A series of far more violent clashes at the site in April and May helped ignite last month’s 11-day Gaza war. The site is the third holiest in Islam and the holiest for Jews, who refer to it as the Temple Mount because it was the location of the biblical temples.

It has frequently been the scene of Israeli-Palestinian violence. This time, the police refrained from entering the compound and appeared to act with more restraint, possibly on the orders of Israel’s newly sworn-in government. 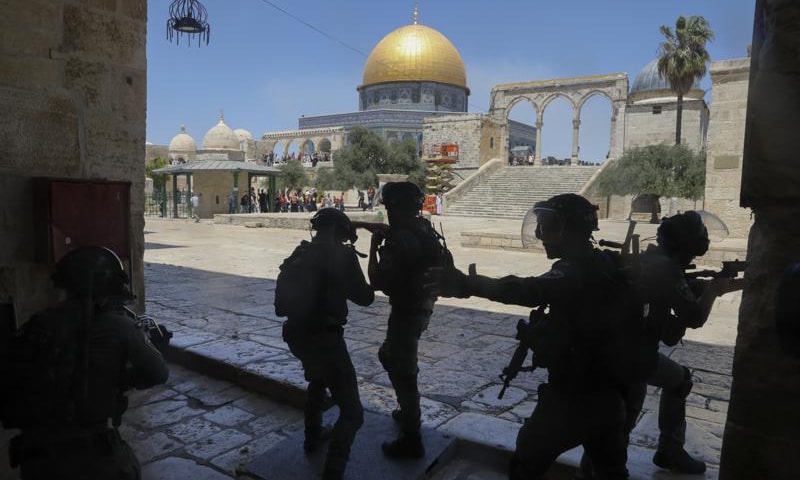 The Red Crescent emergency service said two Palestinians were wounded by rubber bullets and a third by a stone that was thrown.

Young Palestinians could be seen throwing stones at police stationed at an entrance to the compound, who fired stun grenades and rubber-coated bullets.

Hundreds demonstrated after Friday prayers in response to a rally held by Jewish ultranationalists on June 15 (Tuesday) in which dozens had chanted “Death to Arabs” and “May your village burn.” The Palestinians protested against insulting Prophet Muhammad (PBUH), after online videos showed some of the participants in the Tuesday march denigrating him.

Tensions have remained high since an informal cease-fire halted the Gaza war on May 21. Tuesday’s rally was held to celebrate Israel’s capture of east Jerusalem, including the Old City and its holy sites, during the 1967 war.

Police forcibly cleared Palestinians from the route of the march and provided security as many in the crowd made racist chants.

In Gaza, meanwhile, activists mobilised by the territory’s Hamas rulers have sent incendiary balloons across the frontier into Israel, setting fields and farmland ablaze. Israel launched airstrikes on Wednesday and Thursday, targeting what it said were Hamas facilities.

There were no casualties from the strikes, but the violence risked unraveling the truce brokered by Egyptian mediators, who have been meeting with both Israel and Hamas to solidify it.

Israel swore in a new government last weekend, ending Prime Minister Benjamin Netanyahu’s 12 years in power. It relies on a fragile coalition of parties from across Israel’s political spectrum, and is expected to try and sideline the Palestinian issue as much as possible.

Israel captured the West Bank, Gaza and east Jerusalem in the 1967 war, territories the Palestinians want for a future state. The peace process ground to a halt more than a decade ago. Defence budget not increased to provide relief to masses: Qureshi ‘Killing of missing labourers in fake encounter is war crime’