APP – October 07, 2020
UNITED NATIONS: Pakistan, speaking for 55 countries at a United Nations panel, has said that Hong Kong affairs are China’s internal matters, and underscored the importance of non-interference in the domestic affairs of sovereign states – a basic international norm.Ambassador Munir Akram, the Pakistani permanent representative to the UN, was responding to a statement made by Germany, on behalf of a group of mainly western countries, that expressed concern at the impact of China’s new national security law on human rights in Hong Kong.

“The Hong Kong Special Administrative Region is an inalienable part of China and Hong Kong affairs are China’s internal affairs, that brook no interference by foreign forces,” the Pakistani envoy told the General Assembly’s Third Committee, which deals with social, humanitarian and cultural matters, on Tuesday. 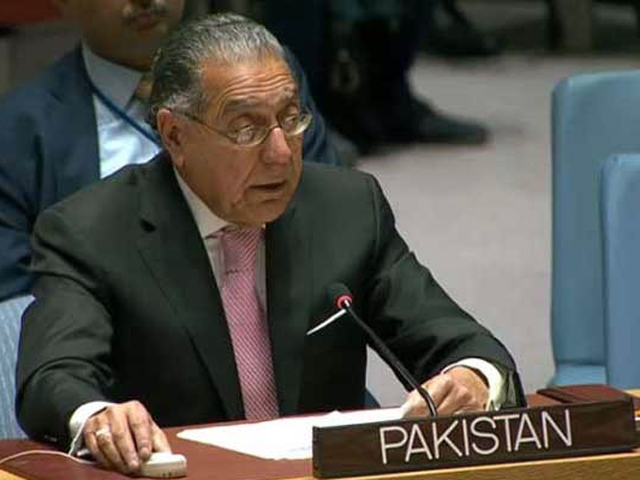 Ambassador Munir Akram addresses the meeting of the General Assembly’s Third Committee on Tuesday. PHOTO: APP
In his remarks, Ambassador Akram named the 55 countries which authorised him to speak on their behalf, and said they supported China’s “one country two systems” policy and stressed that legislative power on national security in any country rests with the state.

“The enactment of the law of the People’s Republic of China on safeguarding national security in the Hong Kong Special Administrative Region is a legitimate measure that ensures one country, two system goes steady and enduring, and that Hong Kong enjoys long term prosperity and stability,” he said.

“The legitimate rights and freedoms of Hong Kong residents can be better exercised in a safe environment.”

He categorically rejected the disinformation that some countries were spreading to discredit China and attempting to meddle in its internal affairs, using the excuse of human rights. Current account deficit soars to $5.8b for recent quarter: PBS Nasir Munir optimist to get recognition