For decades, people around the world have been getting richer and healthier.

The number of humans subsisting on less than $1.90 a day has slowly, but surely, been inching downwards year after year. Until now.

2020, and the global infectious disease outbreak that came with it, have dealt people everywhere a major blow â€” both to their wallets, and to their collective health. The pandemic is driving the wedge between rich and poor further apart in nearly every country in a way that hasn’t been seen in decades.

“This year is different, it’s unique,” Bill Gates said on a conference call with reporters ahead of the release of the Bill and Melinda Gates Foundation’s Goalkeepers 2020 report. “The COVID-19 pandemic has not only stopped progress, it’s pushed it backwards.”

The change is an unprecedented one in the history of the 20 year-old, R830 billion foundation. The foundation’s Goalkeepers report, established in 2017, is meant to serve as an annual look at progress around the world on benchmarks of poverty, health and wellbeing, sanitation, education, and other sustainable development goals.

“Every single one of the goals was moving in the right direction,” Gates said on the call, which replaced what’s normally a star-studded in-person event. “The pandemic has, in almost every dimension, made inequity worse.”

This year, there is almost no progress to share (apart from some improvements in smoking cessation rates worldwide).

“We have to confront the current reality with candor,” the report said. “We’ve regressed.”

Here are some of the biggest setbacks at hand:

The World Bank has estimated that, for the first time since 1998, poverty rates are set to go up dramatically worldwide, “as the global economy falls into recession.”

Here’s how much worse the International Monetary Fund projects the GDP downturn from the coronavirus pandemic will be, as compared to the 2008 recession: 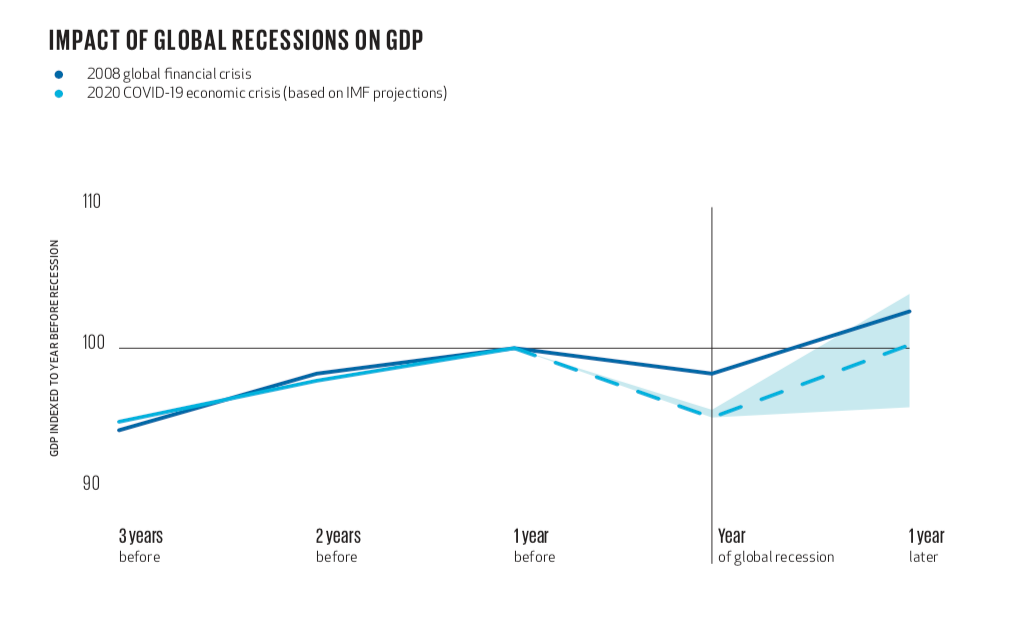 In terms of GDP loss, “this is the worst recession since the end of World War II,” the report notes, suggesting the GDP drop is twice as great as the 2008 recession.

“The last time this many countries were in recession at once was in 1870, literally two lifetimes ago,” the report also said.

The number of people living on less than $1.90 a day, the international benchmark for extreme poverty, is climbing in lockstep with the virus’s spread.

Global poverty is increasing for the first time in 20 years 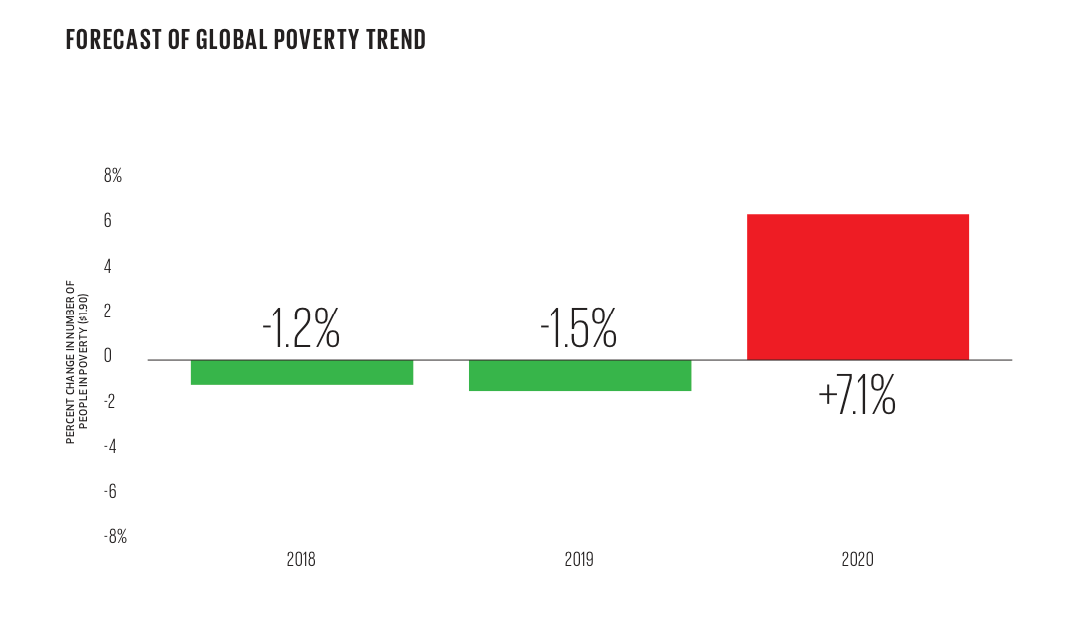 “We have 37 more million people in extreme poverty,” Gates said. “That’s after 20 years where that number’s gone down.”

The downturn isn’t limited to poor countries. In rich countries like the US, income gains had already been uneven in recent years, with the richest getting richer a lot faster than everybody else.

According to the US Census Bureau, roughly one in three Americans had trouble paying their bills in August due to the pandemic, an issue that’s disproportionately affecting Black and Latinx Americans.

The pandemic has also meant many more kids have been going without doses of life-saving vaccines.

According to the Institute for Health Metrics and Evaluation (the Gates Foundation’s data partner) 25 years of progress to get the world vaccinated against deadly diseases was just swiftly wiped out, in 25 weeks during the pandemic.

Here’s one example of how vaccine coverage has dropped to levels that haven’t been seen since the 1990s, showing diphtheria, tetanus, pertussis (DTP) vaccination coverage worldwide: 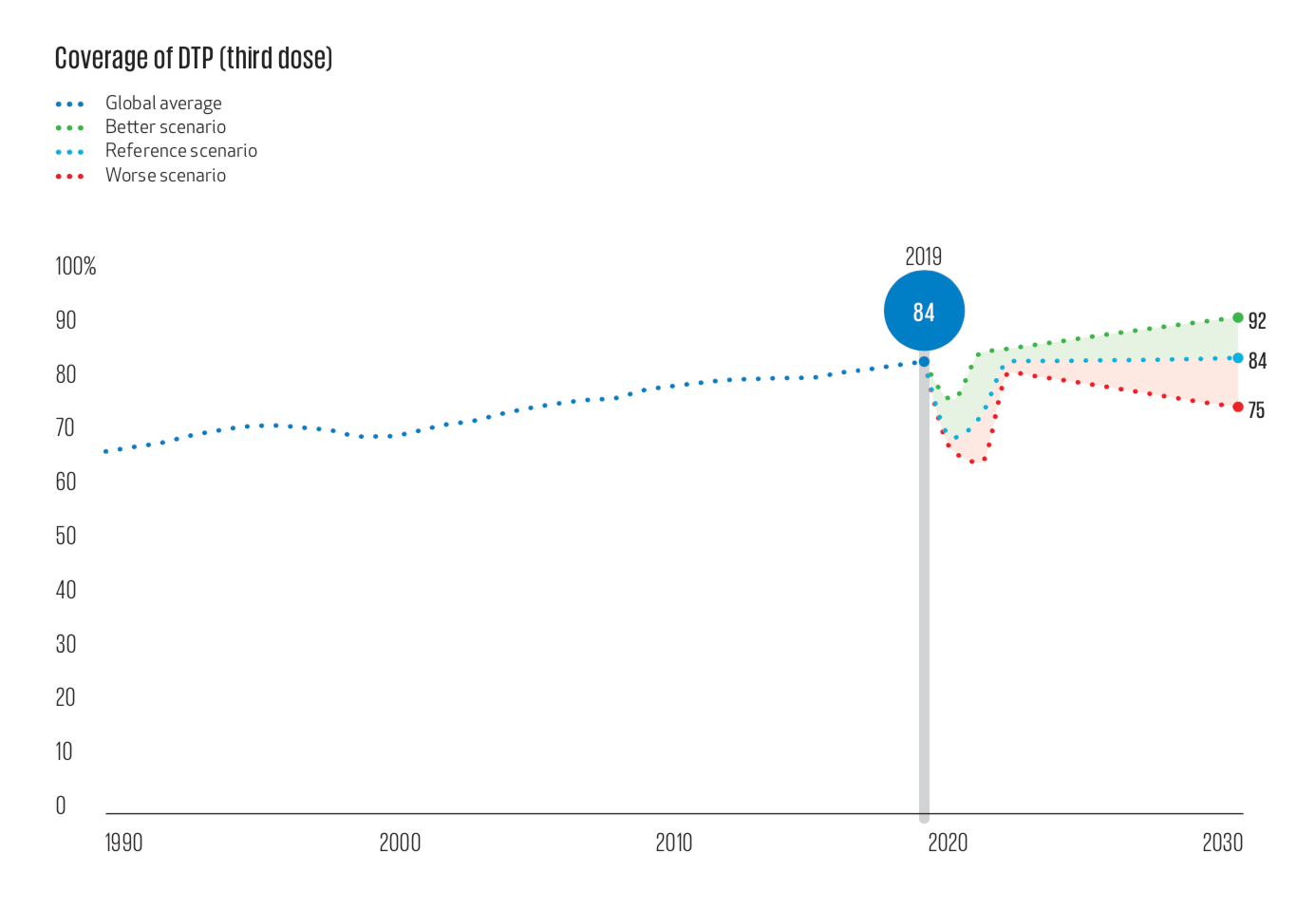 Tetanus, which people sometimes get from stepping on nails, is one infection that herd immunity won’t curb, because you can contract it easily from coming in contact with infected soil, dust, or manure.

That’s one reason why it’s critical that everyone has access to basic preventative shots like DTP, which halt millions of deaths every year.

Girls who left school during the pandemic may never return

Taking kids out of school during the pandemic has no doubt spared some lives, but it’s also put many students behind, and the Goalkeepers report projects that some pupils will never regain what’s been lost.

The percentage of students who’ll learn how to read, for example, is expected to take a nosedive: 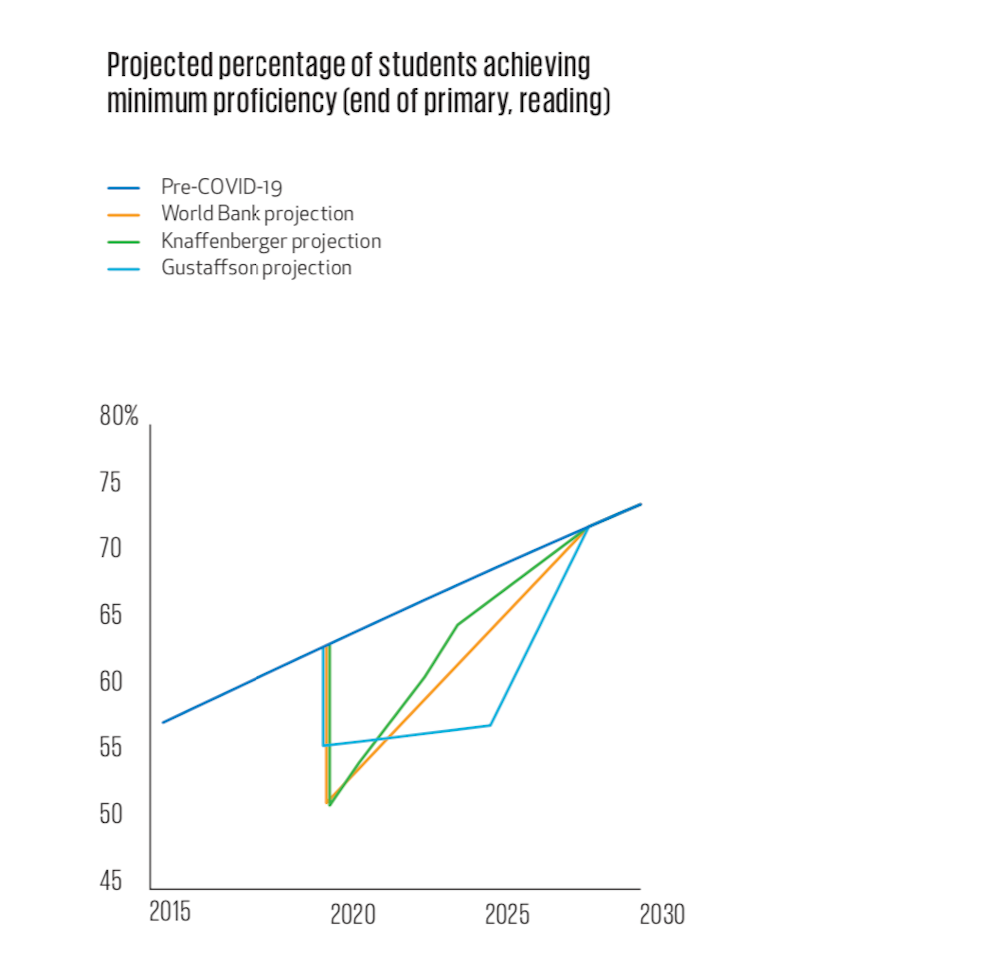 Being home from school can also be dangerous, putting girls at especially higher risk of both physical and sexual abuse (as documented during the ebola outbreak in West Africa). Many may never return to the classroom post-pandemic, for various reasons, including pregnancy and lack of free time for schoolwork while quarantining at home.

To improve on all of these issues and more, “the first thing is to end the pandemic,” Gates said.

One of the best ways to improve the situation quickly is creating a safe, effective vaccine that everyone can use

Coronavirus vaccine development is the one area, Gates has said, where the US deserves some applause for its coronavirus response.

The country has been supporting research and development on multiple leading vaccine candidates, and, as Gates previously told Insider, “somewhere in this set of vaccines is going to be something that’s very effective, and very safe.”

Still, the success of the US-based vaccine programs is not guaranteed. According to the Goalkeepers report, “the probability of success is 7% in early stages and 17% once candidates move on to human testing.”

Most of the 175-plus vaccine candidates being tested worldwide won’t work out, which is one reason why more than 170 countries (apart from the US) have signed on to COVAX, an international agreement for countries to develop and deliver vaccines worldwide.

Gates says there are very “direct” and “selfish” reasons that every country should want to invest in such a collaboration and support the building of factories for vaccine manufacturing worldwide.

“Creating a perfect barrier between your country and the rest of the world is very, very difficult to do” he said.

But creating a world where most people have been inoculated against the virus, “that’s what allows us to go back to normal,” he added.

According to modeling from Northeastern University cited in the Goalkeepers report, if 50 of the richest countries in the world (including the US) buy up the first two billion doses of vaccine, hoarding them for their own people, then “almost twice as many people could die from COVID-19.” 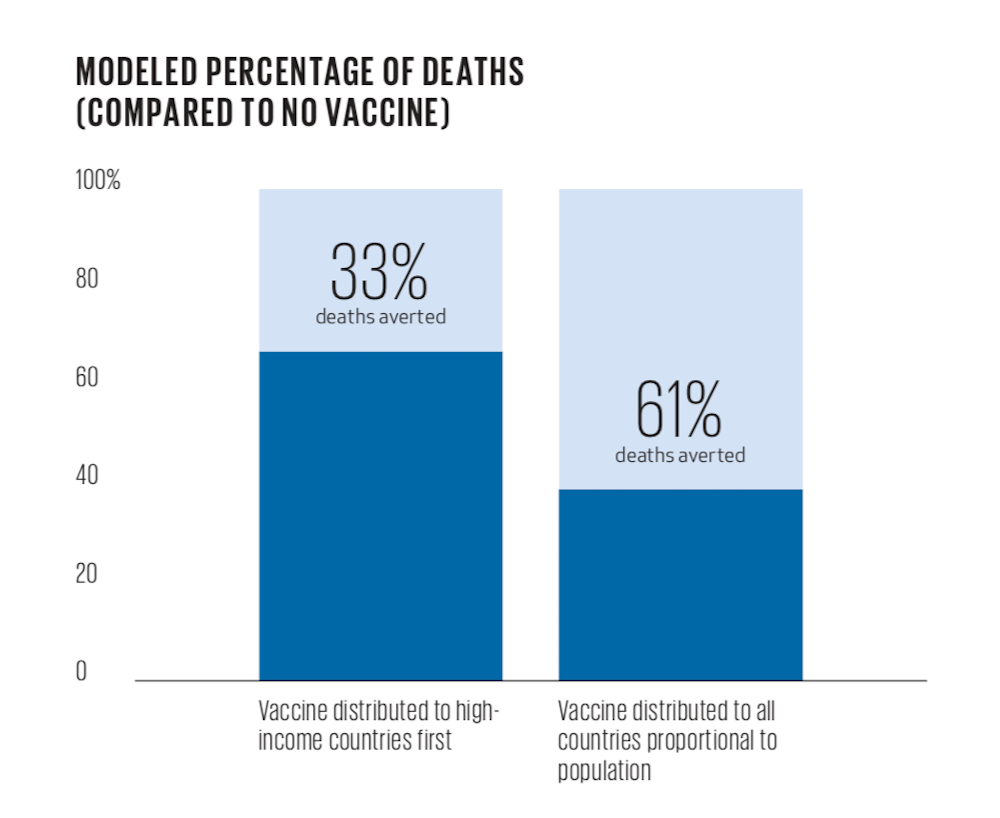 Gates said it’s time to get the “generosity up” in the US, and spend more to create vaccine-manufacturing factories worldwide. It’s a push to get the country back to where it’s been, historically speaking, as a leader in global health ” through administrations both Republican and Democrat.

“I am worried that some donors, in the quality of their aid or the amount of their aid, are not making it the priority that they used to,” Gates said. “It shouldn’t just be the rich countries winning a bidding war, but rather having equity weigh in.”

His best guess is that it might take “two to three years” to get the global development goals back on track.

“We do believe we’ll overcome this,” he said.