According to a notification issued by CAA, the direct flight operations between two countries will remain suspended till February, 2 following the decision by a competent authority.

“Please be informed that as per a decision by the Competent Authority at the appropriate level, all direct flight operations between Pakistan and China are to stalled on immediate basis, initially till February 2, subject to subsequent review,” read a notification. 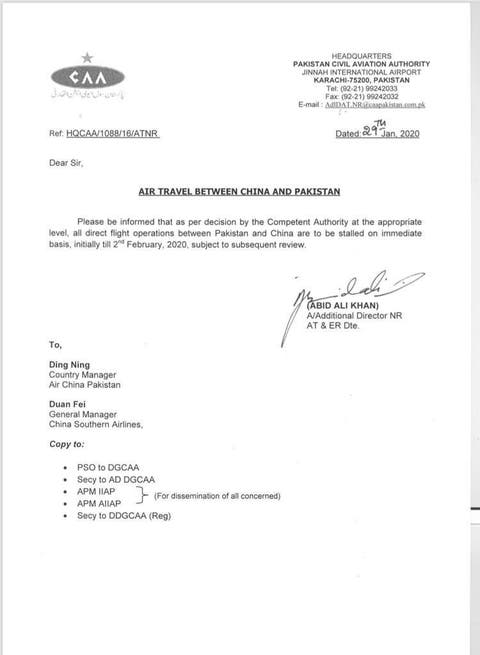 China Airline on Wednesday announced that it is partially suspending its flights between Beijing and Karachi in the light of Wuhan virus.

It must be noted that the total number of confirmed deaths from the newly identified pathogen in China rose by 38 to 170 and infections also jumped.

Chinese health authorities said there were 7,711 confirmed cases of infection as of the end of Wednesday, mostly in Hubei province where the death toll rose by 37 to 162.

Infections have been reported in at least 15 other countries and, with the appearance of the first case in Tibet, in every province and region of mainland China.