LOUISVILLE, Ky. (AP) — The Latest on Kentucky’s race for governor (all times local):

Bevin campaign manager Davis Paine said Wednesday that the Republican’s campaign is exercising its right to ensure every lawful vote was counted. Bevin has not conceded the election.

A recanvass is a check of the vote count to ensure the results were added correctly.

Democrat Andy Beshear said Wednesday he’s confident in the outcome of the election and is starting his transition to move into the governor’s office. Beshear is Kentucky’s attorney general.

Democrat Andy Beshear says he’s confident in the outcome of the Kentucky governor’s election as he pivots toward preparing to govern the state.

Beshear told reporters Wednesday that he has not heard from Republican Gov. Matt Bevin, who has not conceded.

Beshear, the state’s attorney general, said the hard-fought campaign ended Tuesday night and that it’s time to move forward with a smooth transition. 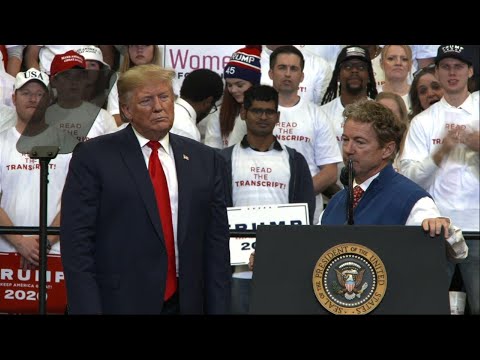 Sen. Paul: ‘We know the name of the whistleblower’

He appointed his top deputy in the attorney general’s office, J. Michael Brown, to lead his transition team. He said the budget he submits to lawmakers early next year will focus on education, health care and infrastructure.

Kentucky has some sorting out to do before inaugurating its next governor.

With 100% of precincts reporting, Beshear — the state’s attorney general and the son of Kentucky’s last Democratic governor, Steve Beshear — had a lead of 5,333 votes out of more than 1.4 million counted, or a margin of nearly 0.4 percentage points. The Associated Press has not declared a winner.

Bevin hinted there might be “irregularities” to look into but didn’t offer specifics.

US tariffs on EU goods would include cheese, wine, aircraft