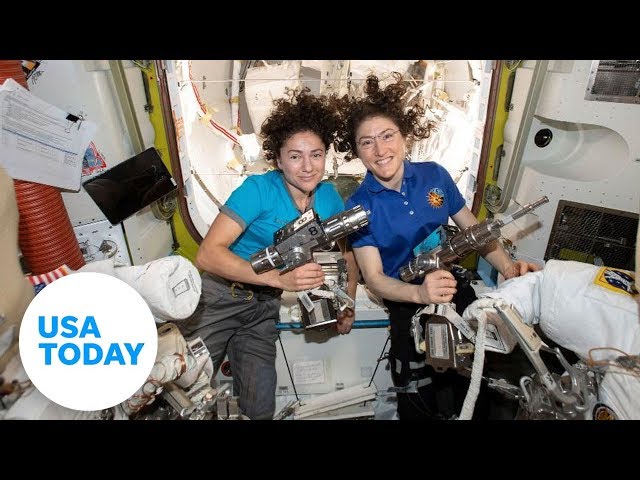 US astronauts Christina Koch and Jessica Meir are freefalling into history — or “HERstory,” as NASA calls it — as the world’s first female spacewalking team.

The two trailblazers ventured out of the International Space Station on Friday morning to replace a broken battery charger about 250 miles above Earth — while their four male colleagues remained inside.

The spacewalk, which began about 7:40 a.m. ET, will last for about five or six hours and can be viewed on NASA’s website.

To tell the two women apart, Koch’s helmet camera views will feature the number 18, while Meir’s will be No. 11. This will be Meir’s maiden spacewalk. Koch, who is making her fourth spacewalk, also has red stripes on her suit.

Their mission marks the first time in a half-century of spacewalking that a woman floated outside with a female crewmate. NASA planned an all-female spacewalk last spring, but did not have enough medium-size suits ready to go.

The first woman to conduct a spacewalk was Soviet cosmonaut Svetlana Savitskaya in 1984, followed closely by NASA astronaut Kathy Sullivan, who says it’s good to finally have enough trained women for the big moment to happen.

An additional 12 American women have conducted 40 spacewalks over the past 35 years. As of Thursday, men dominated the spacewalking field, 213 to 14.

During a recent news conference, Koch and Meir spoke about women working in human spaceflight.

“I think it’s important because of the historical nature of what we’re doing and that in the past, women haven’t always been at the table,” said Koch, an electrical engineer who’s seven months into an 11-month spaceflight that will be the longest by a woman, according to CNN.

“It’s wonderful to be contributing to human spaceflight at a time when all contributions are being accepted, when everyone has a role and that can lead, in turn, to increased chance for success,” she continued.

“There are a lot of people that derive motivation from inspiring stories from people that look like them and I think it’s an important aspect of the story to tell,” Koch added.

Meir, a marine biologist who arrived at the orbiting lab last month, said: “What we’re doing now shows all the work that went in for the decades prior, all of the women that worked to get us where we are today.”

She added: “I think the nice thing for us is we don’t even really think about it on a daily basis, it’s just normal. We’re part of the team, we’re doing this work as an efficient team working together with everybody else, so it’s really nice to see how far that we’ve come.”

The two astronauts will be replacing a faulty battery charge/discharge unit or BCDU — which failed to activate after a spacewalk Oct. 11, according to NASA.

BCDUs regulate the charge for batteries that draw energy from the station’s solar collectors to provide power as the station — which is powered by solar arrays and four sets of batteries — orbits at night, the space agency said.

The battery charger failed after Koch and a male crewmate installed new batteries outside the ISS last week.

NASA put the remaining battery replacements on hold to fix the problem and moved up the women’s planned spacewalk by three days.

While Friday’s event is a long time coming, NASA said it was not purposefully planned, according to Reuters.

“It is something that was bound to happen eventually, and the increase in female astronauts in space for the past year is providing another window of opportunity,” an agency spokeswoman said.