Iran unveiled a new long-range surface-to-air missile system Thursday in its latest demonstration of military power, just two months after its forces shot a U.S. Navy drone out of the sky over the Strait of Hormuz.

The Bavar-373, which Iran claims was built domestically, “can detect… targets or planes at more than 190 miles, lock in at about 155 miles, and destroy it at 124 miles,” Reuters quoted defense minister Amir Hatami as saying.

President Hassan Rouhani described the system as an improvement to the Russian S-300 system, which Moscow delivered to Iran in 2016.

In this photo released by the office of the Iranian Presidency, tje Bavar-373 air-defense missile system is seen after being unveiled by President Hassan Rouhani in Iran on Thursday.(AP/Iranian Presidency Office)

“Now that our enemies do not accept logic, we cannot respond with logic,” Rouhani said in a televised speech Thursday.

“When the enemy launches a missile against us, we cannot give a speech and say: ‘Mr. Rocket, please do not hit our country and our innocent people,” he added. “Rocket-launching sir, if you can please hit a button and self-destroy the missile in the air.'”

On Wednesday, Iran’s state TV reported that the Bavar-373 is able to recognize up to 100 targets at the same time and confront them with six different weapons. 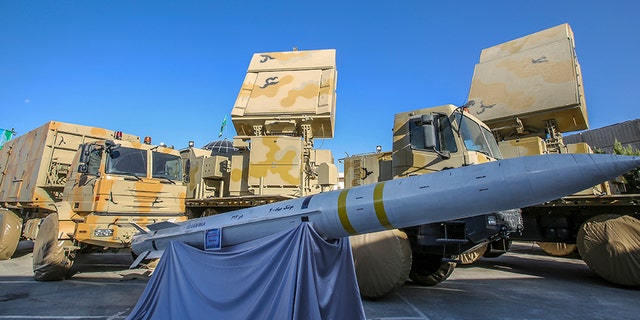 Iran says the Bavar-373 is able to recognize up to 100 targets at a same time and confront them with six different weapons. (AP/Iranian Defense Ministry)

The unveiling of the system comes two months after a U.S. Navy drone was shot out of the sky over the Strait of Hormuz by Iran in what Pentagon officials described as an “unprovoked attack.”

Since 1992, Iran has developed a homegrown defense industry that has produced light and heavy weapons ranging from mortars and torpedoes to tanks and submarines.

The Associated Press contributed to this report.

Huawei gets India nod to participate in 5G trials